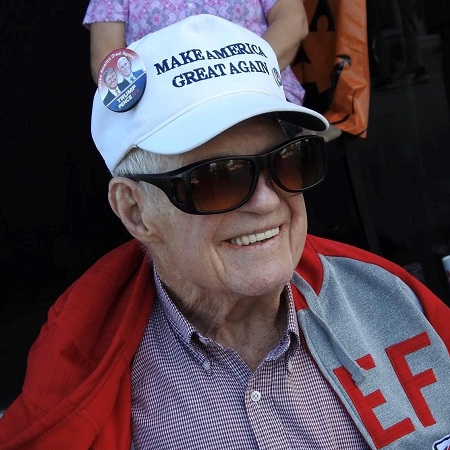 William Thomas Etter was born one of five children on June 10, 1934 in Boonville, MO. Tom married,  Ida Fay Burrow September 5th, 1954 in Gainesville, TX, and with adventure and possibilities on their minds, together they set out for a cross country tour for his Pipeline work.  Later they settled down in Lee Summit, MO, employed by The Gas Service Company as a welder. They raised three, strong-willed and vivacious children.  His hardworking nature showed through in his carwash ownership days, driving a dump truck, welding, and various other tinkering projects. Always “piddling” as mom would say all the time, never had idle hands.

Through all the hard work he was reliably a devout man who found peace and joy in simplicity. Ending each night kneeled in prayer by his bedside, he was a humble, grateful and peaceful man.   His favorite moments in life were on his farm in Leeton, Missouri, surrounded by nature, his gardens, sitting in a deer stand with his cats or in a turkey blind, family and his grumpy old men buddies at the local coffee shop and lastly, his dog’s Hoagie and later Katy. He had strong values and you could always count on him to uphold them, even when it drove Fay crazy.

Tom lived to experience the passing of his wife, Ida Fay Etter on June 4, 2017 and the loss of his oldest son, Russell Wayne Etter on May 7, 2020. He is survived by siblings Janice Hammers, Sandy Buntin, his children William “Bill” Etter, Deanna Corson, 7 grandchildren, and an abundance of adoring great-grandchildren, family, and friends. Tom surrendered to the battles of Colon Cancer peacefully in the arms of his loved ones on January 9th at 86 years young.

When you hear a soft gospel hymn, an old country classic, or see someone enjoying a frosted cold beer from a mug- you can think of Tom. To honor his life, the family requests that in lieu of flowers– you take a moment to enjoy the simple things in life with your family and friends.

A graveside- ceremony will be held in his memory January 23rd at 1PM in Gainesville, TX. Honoring his wishes, his ashes will be spread over the family’s farm in Leeton, Missouri and a memorial will be held at a later date to be determined by the family. Until we see his adorable grinning face again, his life reminds us that in a chaotic world- simplicity and peace are available to us.