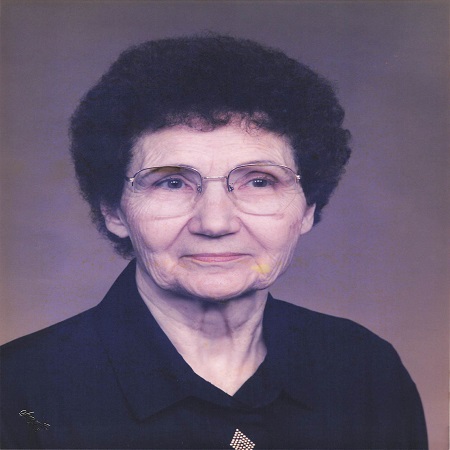 Mertie Evelyn McKenzie, 98, of Whitesboro, Texas was called to her eternal home on Tuesday, August 25, 2020.

Mertie was born on January 18, 1922 in Delaware Bend, Texas to John Shwadlenak and Fannie (Gabrish) Shwadlenak.  She married Albert E. McKenzie in Delaware Bend on July 13, 1940.  She was a 1940 graduate of Whitesboro High School and Bible class award winner.  Mertie was a member of the First Presbyterian Church of Whitesboro. She was employed by Camp Howze in the mail sorting department and then ran a machine for the Whitesboro Manufacturing Company.

She loved watching birds, reading, traveling and baking.  She enjoyed outings with her family, especially going out to eat.

She was preceded in death by her husband, Albert Elan McKenzie, 5 brothers and 1 sister.

There will be visitation beginning at 10:00 am, Thursday, August 27, 2020 followed by an 11:00 am service at Meador Funeral Home Chapel, 401 Hwy 377 N, Whitesboro, Texas.  Interment will follow at Oakwood Cemetery in Whitesboro following the service.