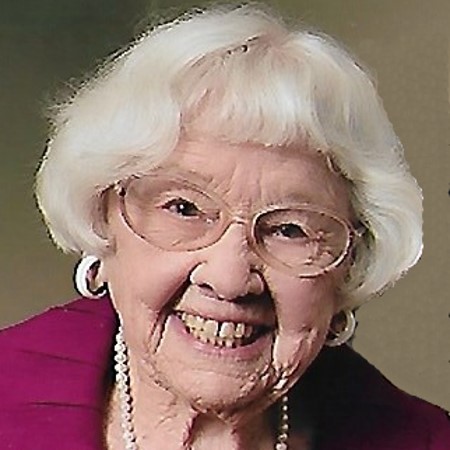 Maudel Baker went to Heaven on June 28, 2019.  Born in Henrietta, TX, on August 25, 1913, to Mr. and Mrs. L.J. Gentry, a builder.  Maudell said her family lived on a farm with her grandfather, a circuit-riding preacher.  When she was growing up and told of Sunday, when she and her family would get in their wagon and ride to churches in the area so her grandfather could preach.  Her brothers and sister would sleep in the back of the wagon on the return trip late at night.  She also told of an Uncle Berbie, who served in WWI and returned home wounded by nerve gas while serving overseas.

Maudie, and her siblings, were able to go college in spite of the Great Depression.  She attended what would become North Texas State University and was the first student to earn a degree in music.  In fact the school created the Music Department for her.  She went on to teach piano for more than sixty years in the Gainesville area.  In fact if you to talk people in Gainesville, TX, and mention, Mrs. Baker, you will hear about how they took lessons from her and some of her student have become piano teachers, church music directors, and parents who brought children to her for lessons.  She taught children as young as three years old and when she could not find teaching materials for students so young she wrote and published her own books.  Maudell continued to teach up until this year, when she became ill at the age of 105 years old.

Maudell married Wayne Johnson in 1939 and in 1940, their son, Larry was born.  The marriage ended when, she and Wayne were divorced.  She later married Hank Baker and in 1949, her daughter, Marlene was born.  Larry went on to play tuba and teach music.  He is currently the Director of the Heritage Brass Band which specializes in historical and patriotic music.  Her daughter was able to play the piano at a young age.  Marlene played piano and organ for churches as well as directing the choir.

Maudell painted pictures and taught painting to her music students and adults as well giving piano lessons.  Her painting feature nature and country life.  In addition, she found time to cook and keep house for her family, as well as playing the piano for the Grand Avenue Baptist Church and the Gainesville State School.  As Maudell got older Marlene was her caretaker, although she was able to live by herself in her home.  Marlene died in September, 2018, after a short illness and Maudell was devastated.  In February, she suffered an illness that put her in the hospital.  Maudell passed away at River Valley Rehab Center.

She is survived by her son, Larry Johnson and his wife, Sally, Granddaughters, Jennifer Ellis, and Laurel Reding and husband Rich, and great granddaughters, Arianna Johnson and Lilli Reding, plus many nieces and nephews.

Visitation will be held at Meador Funeral Home, 1204 E. California St., Gainesville, TX, on Wednesday, July 3, 2019, from 5:00 to 7:00 pm.  On Friday, July 5, 2019 at 11:30 a luncheon for family and friends of Maudell will be held at the Fold at Grand Avenue Baptist Church, followed by a funeral service starting at 1:00 p.m.  Interment will be at Hope Cemetery in Henrietta, TX, following the service.  In lieu of flowers you may wish to make a donation to the Fold at Grand Avenue Baptist Church at 602 N. Grand Ave., Gainesville, TX, or to your favorite charity.