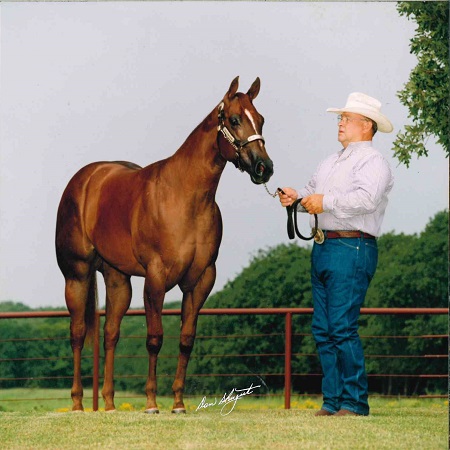 Jim was one of the world’s hardest working and finest horseman, with multiple titles in performance, race, cutting, halter, and breeding disciplines both in the United States and abroad.   As a world-renowned horseman, Jim made 312 AQHA horse shows in 1967, campaigning Wallaby for the World Title; a record that still stands today.  Jim also made history with Noble Tradition, a consecutive four-time AQHA World Champion Halter Stallion.   In his travels, Jim was able to touch many lives with his wisdom and his unique gift with horses.  His legacy will be remembered by the success of the many trainers and horsemen which he mentored through the years.

Jim was born on May 26, 1942, in Medina, Ohio, to Glen and Virginia (Musch) Fuller.  His first career outside of horses, was as a machinist for General Motors.  Later, he operated his own construction company in Alabama.   In 1981 Jim married Sandra Smith in West Palm Beach, Florida. Together they raised their son, Clay, and the three of them operated Fuller Ranch, traveling and promoting their horses.  Jim loved his family and cherished the time he spent with them.

Jim had the ability and knowledge to build and repair anything.  He enjoyed sports, especially football, faithfully supporting the Dallas Cowboys and The Ohio State Buckeyes.

Jim was preceded in death by his parents, Glen and Virginia Fuller, and brother Jerry.

He is survived by his wife, Sandra Fuller, and children Clay, Holly, Buck, and Wendy, as well as numerous grandchildren and nephews.

Floral arrangements may be provided by Hedges Florist or Flowers by Faith, Whitesboro.  Donations in Jim’s memory may be given to Home Hospice of Grayson, Cooke, and Fannin Counties, The American Cancer Society, or the SPCA.

Jim has been entrusted into the care of Meador Funeral Home, Whitesboro, Texas.