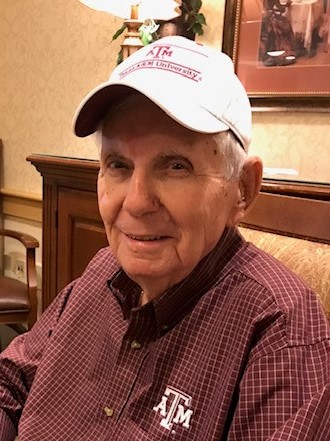 Gordon Clifford Pence,95, of Plano, TX passed away on Tuesday, October 12, 2021 at the Sunrise of Plano. Funeral service will be held on Friday, October 15, 2021 at 2:00 PM at the Meador Funeral Home in Whitesboro with Bro. Rick Carney officiating. Interment will follow at the Sadler Cemetery.

Gordon was born on May 7, 1926 in Whitesboro to Grover and Cora Pence.  He married Martha Brown in 1955 in Smithville, TX. Gordon served in the United States Navy having served in WWII. He served on the aircraft carrier USS Shangri-La. Gordon graduated from the Texas A&M University, and he also graduated from the University of Texas. He worked for the State Welfare department for 20 years and worked for the Social Security Administration for over 30 years. Gordon loved the Aggies; he loved his family especially his 2 grandchildren.