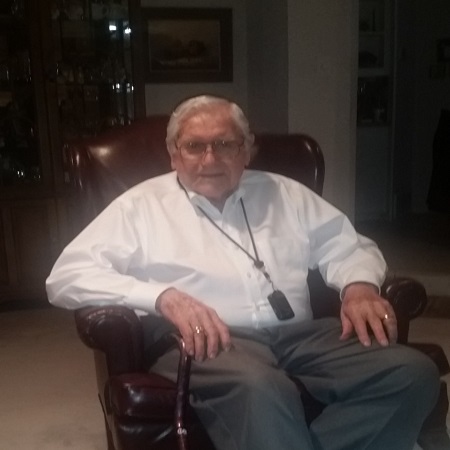 Charlie Lee Wall, 94, of Gainesville, Texas formerly from Fort Worth, Texas, passes away peacefully November 3, 2019.  Funeral Service will be held at 11:00 AM on November 8, 2019, at the Meador Funeral Home Chapel, Gainesville, Texas.  There will be a time of visitation for friends and family held at the funeral home on Thursday, November 7, 2019 from 6:00 PM to 8:00 PM.  Interment will follow at 3:00 PM, with Military Honors at Nocona City Cemetery, Nocona, Texas.

Charlie was born in Nocona, Texas on July 31, 1925, to Arvel Wall and Bessie Russell Wall.  Charlie grew up in Montague County and served in the Army Infantry during WWII as T/Corporal from 1943 to 1946.  He received the Good Conduct Medal, Purple Heart and the Legion of Honor French Order.

He married Madrey Inez Williams on September 6, 1946 in Wichita Falls, Texas.  He entered Texas Christian University in 1946.  After receiving his four year degree, he was an accountant with Ambassador Oil before beginning his career and retired as a Cost Analyst with Bell Helicopter.

After he retired, he and Madrey traveled and visited over 20 countries. He enjoyed his family, friends and watching TCU football games.  He and Brent rarely missed a Saturday game.  Go Frogs!

Charlie was a devoted husband and father.  A good Christian man has gone but will never be forgotten.

His life and love of Christ is remembered in the lives of his surviving family Daughter and Son-in-law Charissa and Bruce Smith.  Son and daughter-in-law Brent and Jan Wall. Grandchildren Darrell Wade, Justin Wall and Jared Wall. Step-granddaughters Breann Decker, Sabrina Rosemund and Kristina Paul. Great-grandson Clayton Wall.  A host of nieces and nephews, by both the Wall and William families, also his family from the Wesley House. Debbie Perry, the staff and many friends there. Charlie was loved by all who knew him and he will be missed by all but never forgotten.