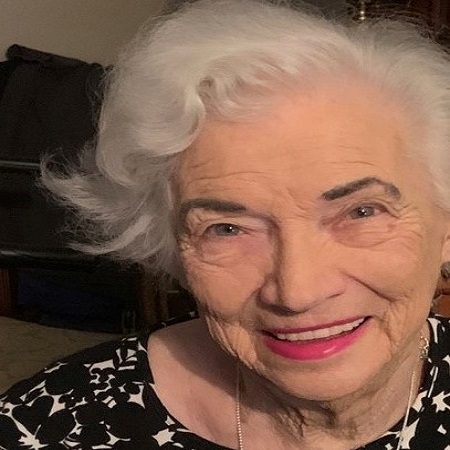 Annie Lena Tamplen, 91, of Denison, Texas, formerly of Whitesboro was called home to her Lord and Savior on Monday, April 12, 2021.

Annie was born on July 24, 1929 in Roane, Texas to her parents Carl and Mary Rodgers.  She was the oldest of four girls and attended school in Sandusky and Whitesboro.  She met Charlie, her husband, in a little café where she was working, the café was where the Whitesboro post office is now.  She and Charles married on June 2, 1945 and began their life together.  In the first 6 ½ years of their marriage they moved to 22 different towns.  Charlie was working on a seismograph crew, working as a driller with Southern Geographic and Atlantic Drilling Company.  Annie worked as a cosmetician, buying and selling cosmetics and jewelry for Portales Drugstore.  In 1980 they moved back to Whitesboro and she went to work at the Branch, it was where the donut shop is today.  She and Charlie enjoyed raising a garden together, he would gather the fruits and vegetables and she would spend time canning all that he brought her.  Annie became a member on the Bones Chapel Church in 1945, and then a member of the First Presbyterian church in Portales in 1957, when they moved back, she transferred to the First Presbyterian church in Whitesboro.  She was a Sunday school teacher for the children and the youth, she was also a moderator for the Women from 1989 to 1992.  She loved to sew, crochet, cook and can for her family.  She also enjoyed fishing and camp outs until her arthritis made it so that it was too difficult to get around.

In lieu of flowers memorials may be made in her honor to Cal Farley’s Boys Ranch at 600 SW 11th Ave. Amarillo, TX 79101 or to the charity of your choice.

Funeral services honoring Annie will be held at 2:00 PM on Friday, April 16, 2021 at Meador Funeral Home in Whitesboro, officiated by Rev. Rick Carney.  Interment will follow at Oakwood Cemetery.  No formal visitation is scheduled.