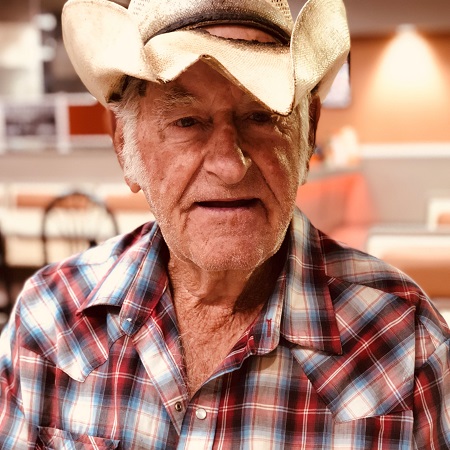 In early life, H.C. worked alongside his brothers and sisters as a child farming with his parents.  He went to school until the 5th grade.  H.C. and his brother James were basically twins being 18 months apart. They left home at the ages of 15 and 16 and have been together ever since. Where you saw one, you saw the other. He worked for the shoe factory, in Gainesville, for quite a while before getting into construction. He was known to ride a motorcycle, and to have even out ran the cops a couple of times.  He always had a smile and $1 bill or quarter to offer to any child.  They tickled him.  He never married or had any children of his own, but was a bonus Dad to James Peyrot, Jr. He was dubbed “Unkie” and that’s how most knew him. He had a kind heart and big hands that were not afraid to work. He worked hard his entire life, right up to the point that he could just no longer do it.  He never wanted for much. He lived a simple life. He lived a good, honest life.

In his later years he could be found eating breakfast at whichever was popular among his crowd that met every morning at 6 a.m..  He drove his little red truck all over Gainesville feeding cows and could barely see over the wheel.  He wore a hat until he literally had to throw it away from the worn holes in the band. He didn’t make it to church every Sunday, but he always made sure to stop by and tithe. He loved Jesus.

He is preceded in death by his parents, John and Monte Peyrot, his brothers, George, Sam, David, Henry, B.T. and Andrew; and his sisters, Hilda Wilson and Ann Wharton; sister-in -law Loreta Peyrot, and nephew J.D. Peyrot.

Viewing will be from 9:00 am-1:00 pm on Monday, January 24, 2022 at Meador Funeral Home Chapel, 1204 E. California Street, Gainesville followed by a Graveside service at 2:00 pm at New Hope Cemetery, Mountain Springs, Texas.

In lieu of flowers, tithe a little extra at your church.