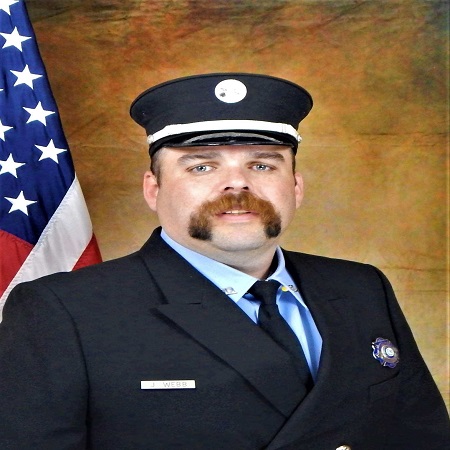 Jonathan Wesley Webb – 38, Known by all as “JON” was born to Randy Webb and Kim “Honse” Webb of Lake Dallas, on September 29th, 1984, at Lewisville Hospital in Lewisville, TX. He passed away at his home in Sunset, Texas on Saturday, December 24th, 2022.

From as early as three years of age, Jon knew exactly what he wanted to be… a fireman. He followed in the footsteps of his grandfather, dad and many relatives who served and are still serving communities in the Fire Service whether Volunteers or Professional.

Jon was his dad’s assistant at Arch Fire Dept. in Arch New Mexico as they served that community and helped to do the maintenance on the equipment. Later the Family moved to Mountainair, NM where He joined the FD at the age of 15 as Junior Fireman and was able to even attend calls while in High School as duty called. He really enjoyed the “getting out of class” part … when the fire pager would sound.

After the family moved back to Texas, Jon Graduated Lake Dallas High School in 2003 and even on his class ring had the Fire Department emblem engraved on the side below his name. In 2004, he joined the Highland Village FD and served there while attending Fire Academy and began his Paramedic Training. And then in 2005 He achieved his Goal of being on a paid Fire department and became a Paramedic on the Kennedale Fire department where he served until Dec. of 2011 as Driver-Engineer / Paramedic.

Since January of 2012, Jon has served as Firefighter / Paramedic on the Hurst Fire Department where he attained more than 15 certifications. All throughout his career, he wanted to grow in his knowledge and anytime some sort of FD training was offered he would say, “Sign Me Up”.

Jon moved to Justin TX while at Kennedale and soon joined the Justin VFD where he and Angie met and served for several years together. In approx. 2016, Jon purchased property in Sunset, TX. While living there on the property in a travel trailer, He and Angie built their home. They were married on their property on May 19th, 2018. Their home overlooks their small lake. They had cattle, sheep, dogs, catfish, wild hogs, deer, and lots of cats. Jon’s hobbies included… hunting, fishing, building, farming, time with Angie and time with family.