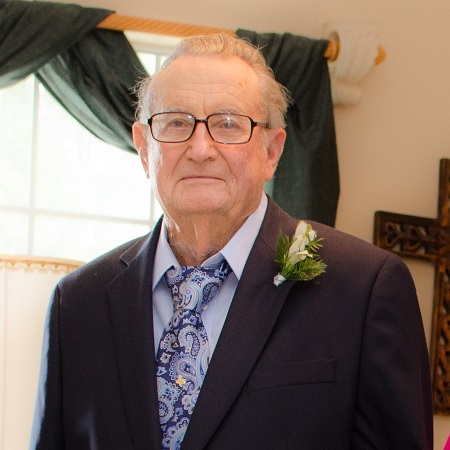 JB was born on March 26, 1936 in Sadler, Texas to Grover Cleveland and Agnes Pauline (O’Neal) Scarbrough.  He married Beverly Alexander on May 23, 1959.  He was an Elder and lifetime member of the Sandy Springs Cumberland Presbyterian Church in Sandusky, he even learned to play the piano so that the church would have piano music.  JB served as a trustee of the Mt. Tabor Cemetery for years and a supporter of the Cumberland Presbyterian Children’s Home in Denton. JB was a lifelong peanut farmer and rancher in the Sandusky area, raising Beefmaster cattle that to this day still roam his land and are worked by his family.  He enjoyed fishing, squirrel hunting and trips to Colorado. JB loved the Lord, and he loved his family beyond anything in this world and he treasured the relationship he had with them all.

JB was preceded in death by his parents, Grover and Agnes Scarbrough and brother, Burrel Scarbrough.

A time of visitation for family and friends will be held on Friday, October 21, 2022 from 6:00 PM to 8:00 PM at Meador Funeral Home of Whitesboro.  Graveside services honoring JB will be held at 2:00 PM on Saturday, October 22, 2022 at Mt. Tabor Cemetery in Sandusky, officiated by Rev. Rick Carney.