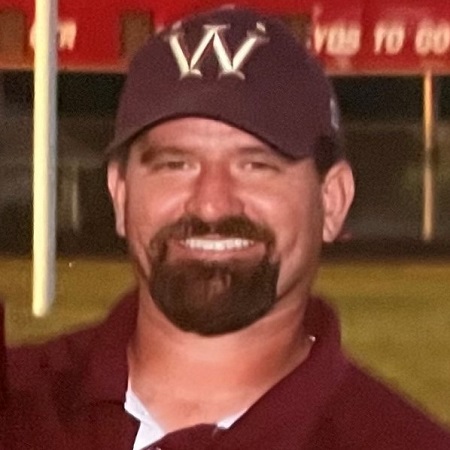 Joel Randall Russell, 45, of Whitesboro, Texas was called home to his Lord and Savior on Monday, August 16, 2021, surrounded by his loving family.

Joel was born July 1, 1976 in Sherman, Texas to Joe and Donna (Jenkins) Russell.  He graduated from Whitesboro High School and Austin College.  On January 16, 1999 he married the love of his life, Kacy Womack.  Joel was employed by FedEx for the last 27 years.  He was a member of First Baptist Church in Whitesboro, where he served as a Deacon for the church and spent many years teaching Sunday School for the last 7 years.   Joel has served on the Whitesboro School Board for the last 13 consecutive years and is the current president.  He loved his community and was passionate about helping the youth in Whitesboro. Joel spent many years coaching little league football, baseball, softball, and soccer.  An athlete himself, he loved the game of baseball and was voted all Conference Pitcher while attending Austin College.  He loved nothing better than a church league baseball game.  Joel also had a passion for agriculture, he was a big supporter of FFA in Whitesboro and spent many hours with the kids teaching them about showing animals, something he learned from his father.  He just couldn’t say no to anyone, if they needed help, he was there. He believed in doing the right thing, no matter the consequences.  Joel loved a good prank.  As a matter of fact, he was so good at pranks, you could never tell if he was telling the truth or not.  Joel was a wonderful friend to many people in this community and a loving husband, father, and son.

Joel is preceded in death by his, father, Joe Russell, grandparents, Raye, and Ollie Lue Jenkins, and A.F. and Mary Russell.

Funeral services honoring Joel will be held at 2:00 PM on Saturday, August 21, 2021 at First Baptist Church in Whitesboro, officiated by Rev. Mike Flanagan, Ryan Harper, and James Worley.  A private family interment will follow at Oakwood Cemetery in Whitesboro.  A time of visitation will be held at the church one hour prior to service time.