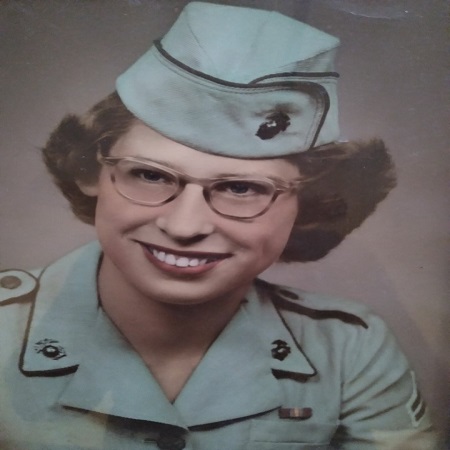 Joan Joycelyn Fox Lee, 86, passed away October 31, 2021 in Gainesville, Texas.  She was born on February 26, 1935 to Earl and Crystal Fox in West Branch, Michigan, the third of seven girls.  Later they adopted her brother Roy.

After graduating from West Branch High School she joined the US Marine Corps and was honorably discharged with the rank of Corporal.

After marrying David Lee, they sold their homes in Michigan and Montana and traveled and lived in their RV for a few years.  They loved spending summers visiting children and relatives in several states.  Winters were spent in southern Oklahoma.  They liked the area and built a house in Gainesville, Texas where they lived for the next 25 years.  There they joined Faith Lutheran Church in Gainesville.

In July and August they would travel north to see their kids who were spread all over.  They enjoyed horses so they had a couple for a few years.  She loved to camp and sit by the fire so they would camp and go to Blue Grass festivals in the Fall.  She also enjoyed playing games, especially Solitaire, Mexican Train and Yahtse.  She was very proud of her dolls that she decorated beautifully.

Memorial service will be held on Saturday, November 20, 2021 at 10:00 am Faith Lutheran Church, 1823 Luther Lane, Gainesville, Texas.  In lieu of flowers, donations can be made to the Faith Lutheran Youth.