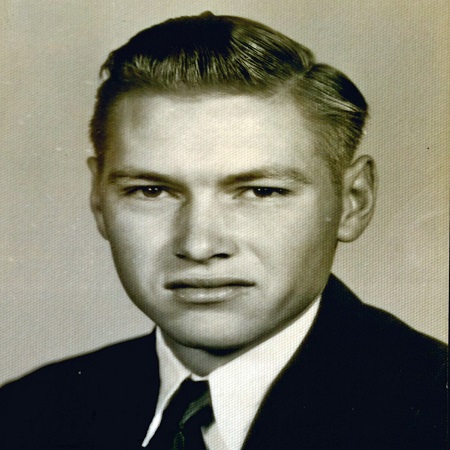 Jerry Dalton (J.D.) Proffer was born September 10, 1931 on the homestead to Samuel Manfred Proffer and Celia Fern (Delisle) Proffer.  He was educated at Oak Valley just east of where he was raised.  He graduated from Gainesville High School in 1949.  He met his future wife Corene thru his cousin Doris, and she became his “Christmas Present”, marrying her December 21, 1952 at Tabernacle Baptist Church in Gainesville.  He served in the United States Army from July 29, 1953 to June 21, 1955 in the Korean War.  While he was away, his oldest son Jerry Don was born.  He only saw him thru pictures Corene sent him until he came home when Jerry Don was 16 months old.  Dalton received his Agriculture Degree from Texas Tech in Lubbock in 1956.  They lived in several Texas towns from Alice to Gainesville where they have lived the last 53 ½ years.  He has been a farmer raising cattle, peanuts, and hay to having a dairy, to his own business, Proffer Ford Tractor at 3 locations in Gainesville, in the late 60’s and 70’s.  He was a member of Tabernacle Baptist Church and served as Deacon for many years.  He worked for the United States Postal Service, starting in Denton, and later transferring to Gainesville where he retired in 1991, then having Proffer Towing in the 90’s.  Officially retiring from the towing business in 1995.  For the past 23 years he has enjoyed being a grandparent, great-grandparent, to enjoying life on the farm, traveling with his wife, to taking care of her at the home for her last 3 ½ years of life.

Services for Dalton will be held at 11:00 AM on Saturday, September 14, 2019 at Meador Funeral Home of Gainesville.  Interment will follow at Fairview Cemetery in Gainesville.  A time of visitation for friends and family will be held one hour prior to services.

In lieu of flowers, donations may be made to Tabernacle Baptist Church and Future Farmers of America.