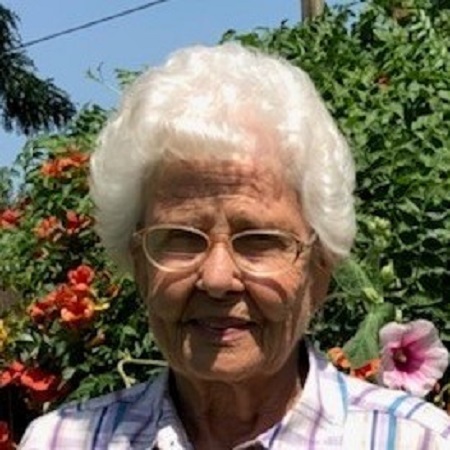 Dolly Marie Johnson, 90, of Whitesboro, TX, was freed of her bondage of Alzheimer’s and began her eternal life with her Lord and Savior Jesus Christ and her beloved husband, Cuyler, on Wednesday, January 5, 2022.  Celebration of life services are to be conducted at 3 o’clock in the afternoon on Sunday, January 9, 2022, at First Baptist Church, Whitesboro, with Reverend Mike Flanagan officiating.  Graveside services will be conducted immediately following at Finally At Rest Cemetery, Whitesboro.  Arrangements are under the direction of Meador Funeral Home.

Dolly was born on August 11, 1931, in Goodlett, TX, to Les and Merle Horn.  She graduated from Achille High School in 1949.  She was the captain of her high school basketball team and quite a force to be reckoned with on the court.  She married her high school sweetheart, the love of her life, Cuyler Johnson, on February 11, 1950.  They moved to Dumas where she was a housewife and a professional seamstress.  Later, she became the Athletic Director’s secretary for more than 20 years.  She was an active member of First Baptist Church in Dumas and then later at First Baptist Church in Whitesboro.  Dolly was the queen of making beautiful quilts and an avid supporter of all Dumas sports, but especially the Dumas Demonette volleyball teams.  Dolly loved to go camping with Cuyler, loved birds, flowers, gardening, but most of all she adored her grandchildren and great-grandchildren.  She was their number one fan of supporting them in their activities.

The family would like to thank the Memory Care Unit of Celebration Senior Living in Denison, TX, for their devotion and superb care of their beloved, feisty Miss Dolly.

In lieu of flowers, the family requests with gratitude that memorial contributions be made to the First Baptist Church Music Ministry, 124 Center Street, Whitesboro, TX, 76273, or the Alzheimer’s Foundation.